It starts before you know.

“Off the bat, I knew it was fair,” Luken Baker said. “There really wasn’t a doubt.”

Little did fans know that Baker’s clutch home run was launched more than a year earlier. 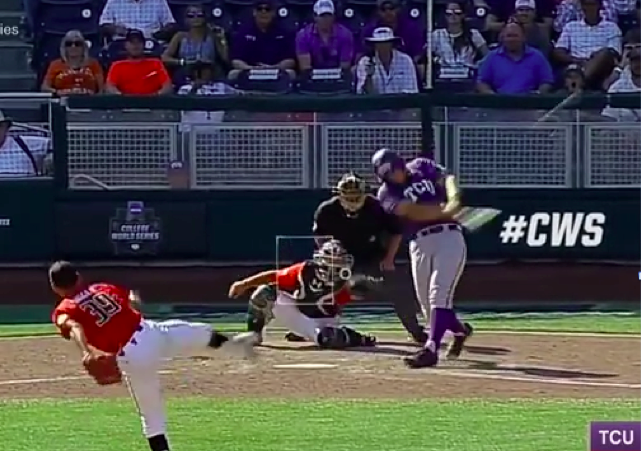 A simple email that stated in no True Blue TCUuncertain terms: “Thanks for your interest, but I’ve decided what I’m doing next.” At the time, 30 major league teams and countless colleges were left wondering why.

There was someone who shared what he shared. Not just the talent. Even though there’s plenty. Prodigious home runs and lightening bolt arms make that all too clear.

Baker and his high school friend, Durbin Feltman, each chose to play baseball at the next level together. The teammates believed that choosing their destiny and committing to the experience and the education would be worth it.

Why put the possibility to chance?

Or more possibly, why grind it out riding minor league buses for the next four or five years?

Over the near term, they felt like there would be more that that.

So, they passed on millions of dollars, or likely they just delayed its ultimate arrival. Call it delayed financial gratification on what will now be an even larger scale and certainly now more to their collective liking.

Any inclination that this young and this talented would come together this way would have made the best Hollywood scriptwriters raise their eyebrows. Nobody saw it coming. Even though, in retrospect, it makes all the sense now.

“The Hit” in TCU lore is now no longer a wide-receiver going across the middle against the Aggies. “The Hit” from here forward happened on Father’s Day at the College World Series against Texas Tech.

Fans and my dad, in the stands with me, talk as they watch the game.

“You know what got you here won’t keep you here. The stadium is new and home runs are way down.”

“Gotcha here. Keep ya here? By design, seven of the eight teams will lose. Play to win.”

The skies were blue. True blue. Not a cloud in the sky. The wind blows in and somewhere in between words and thoughts I’m hoping, praying, wishing, knowing that when talent this good meets effort this focused, it prevails.

People are who they are. Now isn’t the time to give up, or give in. Not when you’re a home run hitter. Keep the fundamentals right and do what you do.

The heat. The pressure. You feel it? It’s a record-setting heatwave against a conference foe on the nation’s biggest stage.

Talent meets opportunity and the ball rockets out of the park to give the good guys the lead. Heat transforms into goose bumps and chills run down the spine. It never really was about the odds – not at this winner-take-all level.

Game’s not over yet, though.

Baker’s lifelong teammate, the aforementioned Durbin, comes in and finishes the game from the pitcher’s mound.

It’s amazing what happens, especially when that’s exactly what you had in mind all along.

Luken Baker smashes a 3 run Home Run to left field to win Game 3 of the 2016 College World Series for the TCU Horned Frogs.